When visiting one of Europe’s old cities every tourist has to walk around the local markets, to experience the culture and atmosphere of the local inhabitants and Barcelona is not an exception. Thanks to Barcelona’s modernist  architecture and Spanish food quality, the city enjoys several of Europe’s best markets! 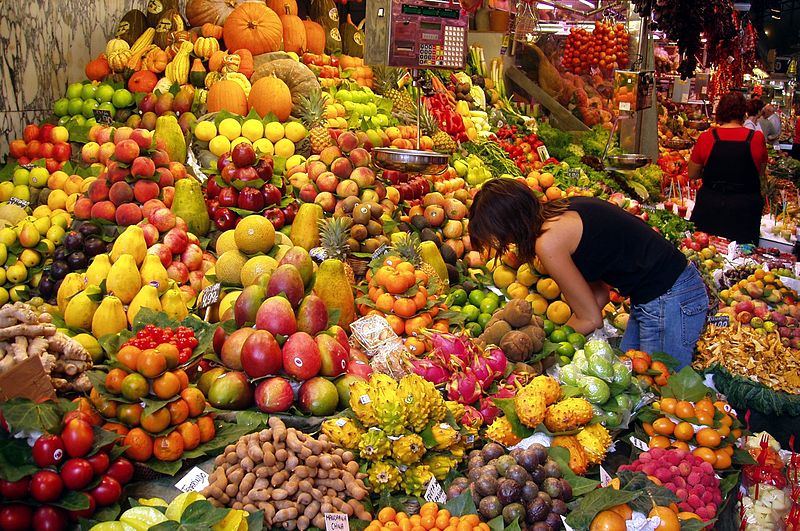 La Boqueria is worldwide renowned, recently “CNN” described it as the best Market in the world beating “Celebrity status markets” like Tokyo’s Fish Market or New York’s Union Square market thanks to the quality of its food product and the restaurants surrounding the market. Originally known as “Mercat de Sant Josep”, this tourist attraction was built in 1840 but its origins are well before this time as an out in the open market, where vendors located outside the city walls evaded harsh taxes.

The word “boc” in catalan means male goat and for this the market receives it most reknown name, as this meat was its most well-known product in the past. The local government decided to relocate the meat vendors as they were disturbing the peace of the neighborhood. During this time a tradition was instated where vendors would give out a free flower to each client who would buy from their stand. Flower vending stands were developed for this sole need and thanks to this nowadays we can rejoice in the floral surroundings La Boqueria has. The building as we know was finished in 1911, where we can visit around 300 different stands offering products from all around Spain. So if you are looking for Spanish tradition and quality of product, this is the place to go! And if you are hungry are hungry don’t worry, there are several small restaurant stands to try out! 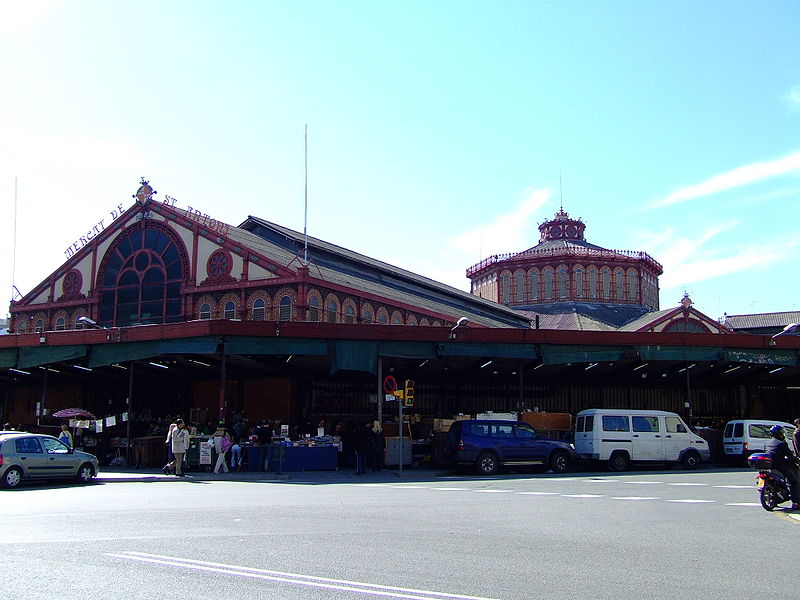 The Mercat de Sant Antoni is the second biggest market in Barcelona, with 100 000 visitors (compared the 200 000 La Boqueria receives) It is less of a tourist attraction, so you can breathe the true Catalan atmosphere and buy fresh food or clothing. If you are a collector of rare books and coins, go check out the market every Sunday! This was the first market to be designed following the “Cerdá Plan” of constructing the Eixample neighborhood . Officially the market was established in 1936, when the “Fira de Bellcaire” was relocated to the emblematic building. 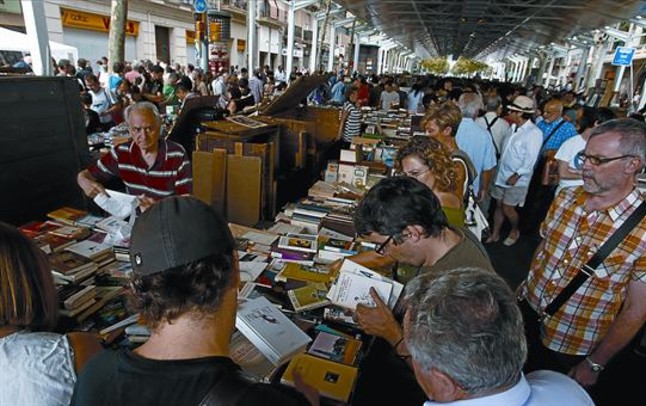 Thanks to the intellectual fashion of that era, a market was created to sell and re-sell old books, but thanks to the climate it had to be relocated constantly. Once this book market joined the “Mercat de Padró”, the market was renamed to Mercat de Sant Antoni. As tradition every Sunday stands rise where you can find rare books and collectors’ items. In the Mercat de Sant Antoni you can breathe the true catalan atmosphere, enjoy the fresh food and market and exchange the best books! 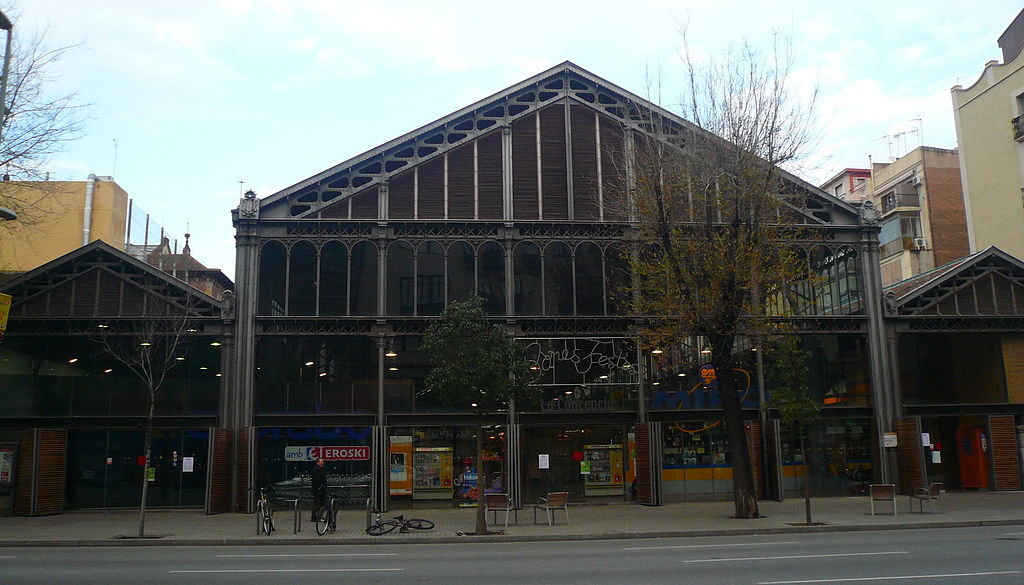 The Mercat de la Concepcio is another typical Catalan market. The building was designed by the same architect that imagined the Mercat de Sant Antoni. The market receives its name thanks to the church which is near. The market is designed to seem like a town square, place where all the neighborhood can unite to socialize. Here you can find all kind of fresh food, but what the market is most well-known for its it’s Flower Stands.

The Flower market is open all day, so if you are in a hustle for buying a souvenir don’t hurry! Go to Barcelona’s flower market anytime. If you have the chance of visiting Barcelona the first weekend of June, don’t miss going to this market! As the vendors will be dressed in typical Catalan attire. 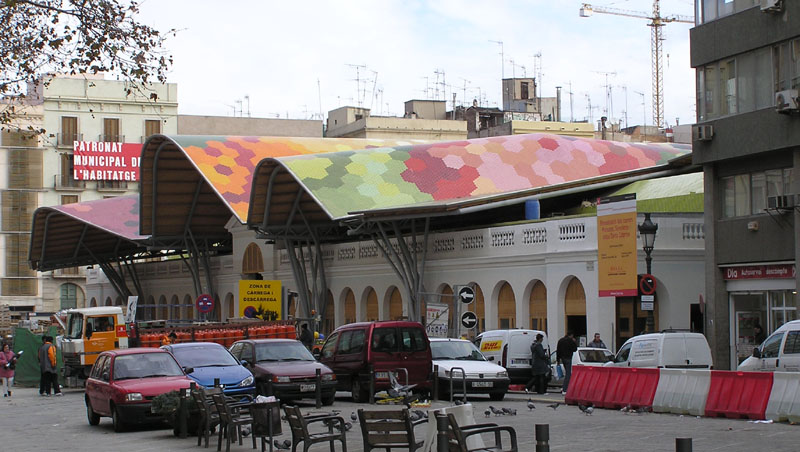 Close to Barcelona’s Cathedral we can find one of Barcelona’s most emblematic markets, Mercat de Santa Caterina, who receives its name thanks to the old cloister located where the market is now! Even though Barcelona’s notorious architecture, the market stands out thanks to its colorful roof simulating an aerial view of the Food Stands as always inspired by the renamed architect Antoni Gaudí . This up and coming market is dedicated to selling all type of fresh food, and if this makes you hungry you can visit the tapas bar  «Cuines de Santa Catarina»

Previous Article Catalan tradition
Next Article Montjuic barcelonas strongpoint
Back to Blog
Made with ❤ by velvetzoo.es in Barcelona