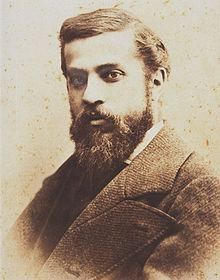 “Beauty is the splendor of truth, and like art is beauty, without truth there is no art”

If experts had to chose who would they describe as the best architect in Catalan history, Antoni Gaudí would be the resound answer. Almost 100 years after the death of the architect, Gaudí can be found in all lists of most influent architects throughout history.

Here in Barcelona we enjoy the luxury of passing by his work routinely. This doesn’t mean that we are used to, or bored of his achievements. Every new glance to his buildings reveals a new discovery and enlightenment to our imagination.

The notorious architect was born in 1852 to a Boilermaker. He was the smallest of 5 brothers. It is unclear where he was born exactly but it is known that he grew up in the region of Baix Camp. Gaudí was a big fan of the Mediterranean climate and region, and inspiration of his natal natural surroundings can be found all throughout his work. Thanks to working in his dad’s workshop, he grew interest in everything artisanal. After deciding to enter the construction business, to pay for his university studies he worked as a draftsman for several different companies. He finally graduated in 1878 in the University of Barcelona as a respectable architect, as he already had earned the respect of his peers. 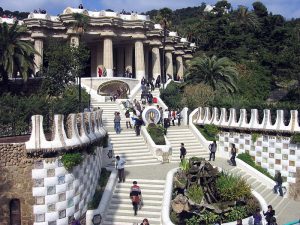 Antoni Gaudi is the banner of Catalan Modernism and thanks to one of his biggest sponsors, Eusebi Güell, nowadays we can rejoice in the Güell Park and walk around its legendary fountains. Thanks to the hard earned respect with Güell’s sponsorship, Gaudí received the necessary fame to move on to bigger Projects, like the Sagrada Familia, construction still unfinished to this day. 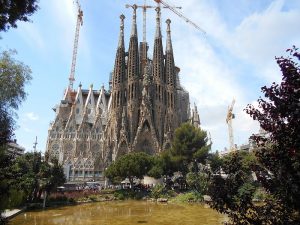 Although of its unfinished state, the Sagrada Familia is one of Barcelona’s main tourist Attraction. Only St. Peter’s Basilic surpasses the Catalan temple as the most visited church in Europe. So if you are planning on visiting the temple, study the possibility of acquiring skip the line tickets. The Construction started in 1882 and day to day you can observe new detail being added to its facade.

The Sagrada Familia centered Antoni Gaudí’s personal and work life. The early 1910s were hard days for the Architect.

“My close friends are dead; I do not have a family, nor clients, nor fortune, nor nothing. Therefore, I can dive myself fully into the Temple”

His last days were spent in his small workshop in the Sagrada Familia. With no family, wife, or friends to entertain him, he devoted his last days to his workshop. 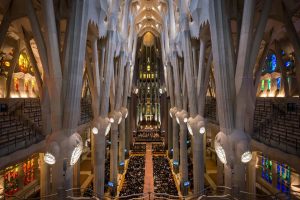 Antoni Gaudí was a very religious man. The seventh of June the 73-year-old architect was on his way to his routinely daily prayers but in the middle of his commute, he was ran over by a tram which left him unconscious. Thanks to his scruffy outfit he was confused with a beggar and was not aided until it was too late. He died 3 days’ later in the hospital. His ashes were confined the 12th of June 1926 in the Sagrada Familia, surrounded by friends and admirers, awaiting the finishing touch to his life work. 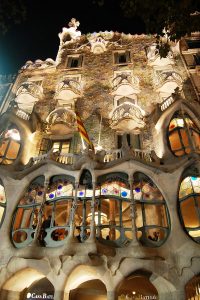 Everything done by Gaudí is worth watching if you are planning a tour through Barcelona. The expansion of Barcelona in the mid 1800s gave the opportunity to many Catalan architects to expose their art in the new destrict of Eixample (catalan for expansion). The Apple of Discord can be found in this district and is a brief summary of Catalan Modernism. Here you will find buildings designed by four of the most famous modernist architects; Lluís Domènech i Montaner, Josep Puig i Cadafalch, Enric Sagnier and of course Antonio Gaudi. My personal favorite, Casa Batlló, is a Most Not Miss.

What is your favorite building designed by the best Catalan Architect? What do you wish to visit related to Modernism during your stay in Barcelona? Remember you can visit Gaudi’s movement with us!

Next Article Universal expo 1929 and how it changed barcelona
Back to Blog
Made with ❤ by velvetzoo.es in Barcelona